The treacherous waters of Bass Strait have claimed hundreds of ships and more than a thousand lives. Ever since Bass Strait was charted by George Bass and Matthew Flinders in 1798, many ship’s captains have decided to risk the dangerous passage to shorten the time needed to reach Sydney. Many have come to grief.

The King Island Maritime Trail Shipwrecks and Safe Havens tells some of the stories of the shipwrecks, both heart breaking and heroic. It also tells of the safe havens set up at Currie and Grassy, and of the welcome lighthouses built at Cape Wickham and Currie. In the words of keeper William Hickmott, “I suppose there are no lights in these waters so blest by sailors as the two upon King Island.”

At interpretation sites all around the island, memorial cairns will give you an insight into the lives of those shipwrecked, the brave rescuers, and the lighthouse keepers who worked tirelessly through the night to make the King Island waters safe.

As you follow the maritime trail, you’ll find yourself transported back to the days when travel by ship was a risky and dangerous adventure. Listen for the despairing cries of the female convicts about the Neva: only a handful survived the wreck. At the Neva cairn, you’ll be able to read about the miraculous escape of the ship’s most troublesome passengers, the Irish convict Rose Ann Hyland. 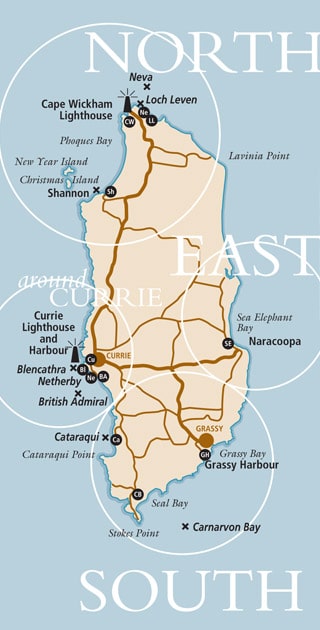