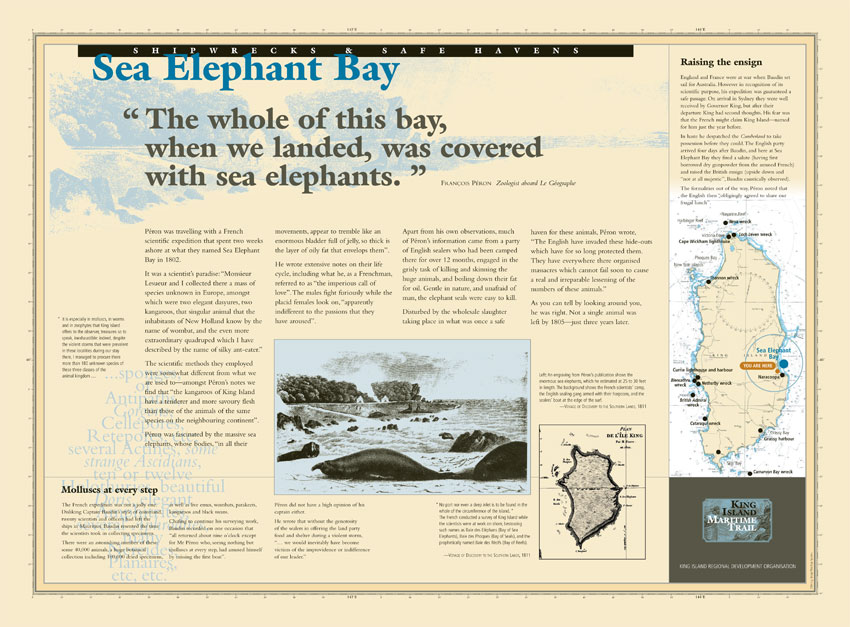 “The whole of this bay, when we landed, was covered with sea elephants.” FRANCOIS PERON Zoologist aboard Le Geographe

Peron was travelling with a French scientific expedition that spent two weeks ashore at what they named Sea Elephant Bay in 1802.

Peron was fascinated by the massive sea elephants, whose bodies, “in all their movements, appear to tremble like an enormous bladder full of jelly, so thick is the layer of oily fat that envelops them.”

He wrote extensive notes on their life cycle, including what he as a Frenchman, referred to as “the imperious call of love”. The males fight furiously while the placid females look on, “apparently indifferent to the passions that they have aroused”.

Apart from his own observations, much of Peron’s information came from a party of English sealers who had been camped there for over 12 months, engaged in the grisly task of killing and skinning the huge animals, and boiling down their fat for oil. Gentle in nature, and unafraid of man, the elephant seals were easy to kill.

Disturbed by the wholesale slaughter taking place in what was once a safe haven for these animals, Peron wrote, “The English have invaded these hide-outs which have for so long protected them. They have everywhere organised massacres which cannot fail soon to cause a real and irreparable lessening of the numbers of these animals.”

He was right. Not a single animal was left by 1805 – just three years later.