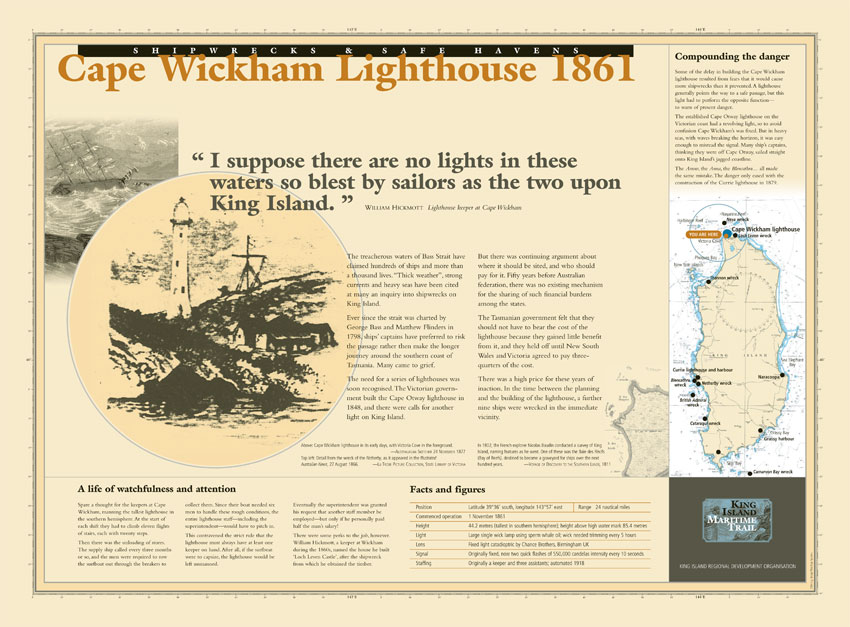 “I suppose there are no lights in these waters so blest by sailors as the two upon King Island” William Hickmott, lighthouse keeper Cape Wickham

The treacherous waters surrounding King Island have claimed hundreds of ships and more than a thousand lives. Ever since Bass Strait was charted by George Bass and Matthew Flinders in 1798, many ship’s captains have decided to risk the dangerous passage to shorten the time needed to reach Sydney.

Some of the delay in building the Cape Wickham lighthouse resulted from fears that it would cause more shipwrecks than it prevented. A lighthouse generally points the way to a safe passage, but this light had to perform the opposite function – to warn of present danger.

The established Cape Otway lighthouse on the Victorian coast had a revolving light, so to avoid confusion Cape Wickham’s was fixed. But in heavy seas, with waves breaking the horizon, it was easy enough the misread the signal. Many ship’s captains, thinking they were off Cape Otway, sailed straight onto King Island’s jagged coastline.

The Arrow, the Anna, the Blencathra all made the same mistake. The danger only eased with the construction of the Currie lighthouse in 1879.

Lighthouse keepers on King Island lived a spartan life of constant watchfulness. And those at the Cape Wickham light – tallest in the southern hemisphere – had to climb eleven flights of stairs, each with twenty steps, at the start of each shift!

Keeper Col Cotter had the last word:
“People seem to have romantic notions about lighthouse keepers, but I’ve found nothing romantic about it. It’s a long way up that light at 2.00 a.m.”