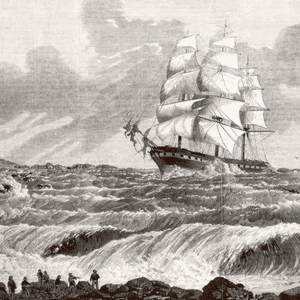 King Island has a rich and sometimes terrible history of shipwrecks.

The rocks surrounding this treacherous stretch of shoreline have many varied tales to tell.

Some are tales of survival celebrated by the descendants of those were fortunate enough to reach shore. The Netherby was a three-masted clipper which had already experienced an attack by pirates off the coast of China in 1864 before setting sail for Australia from London in 1866. Three months into the voyage the ship became lost in a thick fog before striking the west coast of King Island. Incredibly, none of the 413 passengers or 38 crew lost their lives with many of them starting families and careers which have enriched Australia for generations.

Others were less fortunate such with hundreds of lives lost in fearful and ghastly circumstances. The Cataraqui sank in 1845 and is still listed as Australia’s worst civil maritime disaster with a loss of 406 lives.

Details of King Island’s maritime history have recently been added to the excellent King Island tourism website to tell many of the stories of the shipwrecks, both heartbreaking and heroic. Also told are the stories of the safe havens set up at Currie and Grassy, and of the life-saving lighthouses built at Cape Wickham and Currie. In the words of keeper William Hickmott, “I suppose there are no lights in these waters so blest by sailors as the two upon King Island.”

Visitors can also arrange to climb Currie’s lighthouse which is located a few hundred meters from the fascinating King Island Historical Museum. A scenic thirty-minute drive from Currie will take you to the tallest lighthouse in the Southern Hemisphere found on King Island’s northern tip. Cape Wickham is not as lonely and desolate as it once was for the brave and hardy lighthousekeepers (the descendants of whom still live on the island) as the gleaming white beacon now sits nestled among the 18 stunning holes of Cape Wickham Golf Course.