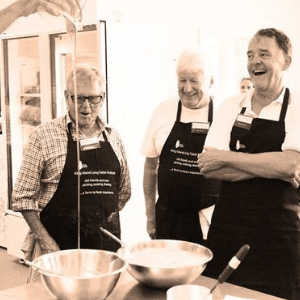 King Islanders tend to be pretty much the best kind of people but if they have a flaw it would be related to their lack of punctuality or their inability to plan ahead. Maybe it’s all part of the island time culture or a reflection of the general laid-back feeling visitors so enjoy but it does make it harder to plan ahead when King Islanders believe an RSVP is a contagious breathing disorder.

Fortunately, King Island is blessed with a sufficient number of talented people residing at the other end of the relaxation spectrum having graduated from the school of i dotting and t crossing. These talented and generous people plan a wide range of fabulous local events months and sometimes years in advance.

The King Island Long Table Festival is run by several such people with the foresight to choose dates for the 2020 festival three years ago. This ensured they had sufficient time to guarantee the availability of the best chefs, the best produce and the best venues to ensure the best possible festival. The previous 11 festivals have been held over a three day weekend which has frequently left guests wanting more.  This year the event kicks off on Thursday and runs right through the weekend finishing on Tuesday. Guests can select as many or as few events to attend as they wish from the informative and varied farm tours, a cocktail party, an art and architecture experience and even a printmaking course using edible materials.

The Long Table starts on April 2nd but in the meantime there are plenty more events and activities to keep visitors occupied. The Melbourne Cup long weekend at the start of November brings the King Island Open held at the King Island Golf and Bowling Club in Currie. This event has been in existence long before the construction of Cape Wickham and Ocean Dunes golf courses made King Island a golfing mecca and is played on the 9 hole, 12 green course in Currie.

Golf is a sport which has been played on King Island since 1910 making it a relative newcomer when compared with horse racing which has been a King Island staple since the winners were paid with wallaby skins in 1892. The 2019/20 season is comprised of seven race days spread between December 1st and Australia Day. As with most events on King Island, the races are run almost entirely by volunteers with a huge army of them turning out year after year to support the sport they love. While the competition is fierce between rival stables it is fair to say that the general atmosphere is extremely relaxed and informal.

Visitors and locals will barely have time to draw breath after the last race on Australia Day before the most relaxed and welcoming music festival in Australia throws open its arms to welcome another crowd of up for it musicians, visitors and locals. The Festival of King Island is better known as FOKI and packs an incredible amount of activities into one short weekend. There’s music from some of Australia’s best and emerging artists of course but there are also regular yoga sessions, delicious local King Island food, an eye-watering and fear-inducing water slide, a raft race, pie-eating competition and more.

FOKI is pretty much the definition of a chilled-out event which is far from how the competitors feel in another of King Island’s established annual events in the Hydro Tasmania King Island Imperial 20. This is Australia’s only coast-to-coast foot race and has been drawing a friendly crowd of athletes for well over two decades. The atmosphere may well feature King Island’s legendary warm welcome but the 32 km course can be very unforgiving especially if the famously fickle Roaring Forties decide to play a part. There is also a walking event, relay teams are welcome and, of course, the Imperial 20 would not be complete without the beach events which include the famous Free Willy nude beach run.

The Imperial 20 is always held on the second weekend in March and a few weeks after that we’re back to where we started with the Long Table Festival. For an island with a population of 1600 these volunteer-run events are an amazing testament to the community spirit and drive of those people who work so hard throughout each year to promote their passion. That’s without even mentioning the numerous art events, the legendary three-team football league or the sailing which all contribute to guarantee a packed and diverse range of activities for locals and visitors alike.